As 21st century consumers, we are all too acquainted with commercial battles to impose one technology over the rest on the market. We are currently witnessing battles between Android and iOS, between Windows and Mac, among videogame console manufacturers (PlayStation, Wii, Xbox, etc.), among types of car engines (gas, diesel, electric, hybrid), and so many more.

The first major commercial battle of this nature was probably at the end of the 70s, early 80s. It was the war to impose a home videocassette player and recorder, the battle between VHS and Betamax. 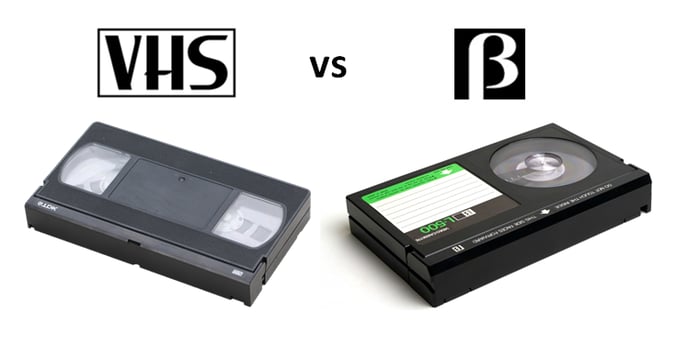 It is the 70s. TV is the queen of home entertainment. There are no video consoles, PCs are extremely rare and there is no internet. TV audiences are colossal and a handful of channels share the profits from advertising by broadcasting contents in return: news, entertainment programs and movies.

At this time, it was the film industry the one heavily endangered by the success of TV. However, it was a manageable threat. Film production companies waited long before giving authorization to broadcast a movie on TV, in order to protect their business in the box office. The balance seemed stable.

The emergence of the home videorecorder

Sony wanted to revolutionize the entertainment market with a home videorecorder and player, similar to the audiocassette that was commonly used at the time. And they wanted to do it their way: with a quality product, their own proprietary standard and at a high price.

In 1975, Sony launches its format, Betamax. This system inherited characteristics from two previous formats: the Sony video camera format (videocorder) and the U‑Matic (professional format.) It worked really well, both at a mechanical level (tape system) and at a quality level. In order to overcome technical difficulties, the engineers at Sony developed a “dense” recording system (thus its name, Betamax, from the Japanese word ‘beta’, meaning thick, dense.) 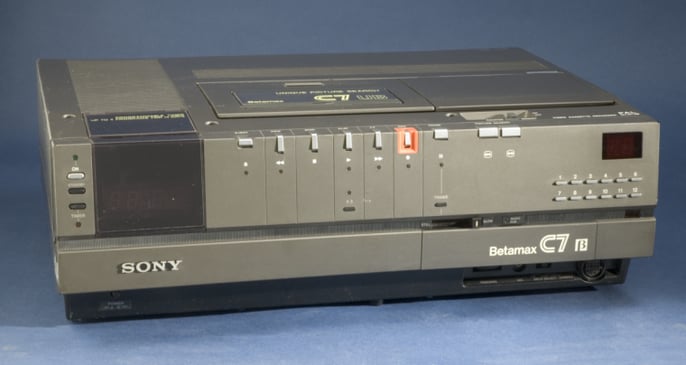 The winner takes it all

It was possible for Betamax and VHS to cohabit on the market along with some other format that arose later on (does anybody remember the Video2000 promoted by Philips and Grundig?) At the end of the day, videorecorder users were independent in a way: they bought blank tapes, recorded TV programs and played them as often as they wished. The videorecorder and player incorporated functions that sounded like they were straight out of a Sci‑Fi: you could program the device to connect at a certain time and record the channel of your preference while you were out enjoying a weekend in the mountains or simply watching a different TV channel.

However, it turned out that the videorecorder market suffered from the network effect (or “network externality”.) A product is said to have network externality when the value it offers to its user grows as the number of people using it increases. Facebook, Whatsapp or even the internet also share this characteristic: the more people use Whatsapp, the better is it for each user.

As for the videorecorder, its network externality was double: (1) being able to share recorded content with friends and (2) the emergence of a new business promoted by film production companies, that of video stores, who were not about to foster the coexistence of multiple video formats that would force them to multiply movie stocks in every branch.

Everybody soon realized that only one could survive the battle for imposing a video format.

Sony started sooner, it was a prestigious technological company, they had a good product… but VHS won, as it became the prevailing home video standard in the world until the emergence of the DVD many years later.

Here are some of the key points in this defeat, key points that are even today a source of inspiration for any Marketing department facing the launch of a product.

Quality is not everything

Betamax was better than VHS. Their image quality and especially sound quality was superior and their cassette mechanical system was more reliable and robust.

However, VHS was superior in only one aspect: the length of the tapes. Betamax only allowed to record one hour, it was not even enough for a football game. VHS allowed users to record two hours and soon developed new tapes and recording systems to record four and even eight hours. Each of these improvements was detrimental to quality (there was more information stored in the same space at the expense of losing detail), but as it turned out, consumers valued more the possibility to make longer recordings than enjoying good image and sound quality.

Sony has never been a cheap brand; that is simply not the place they take in the market. Their TRINITRON TVs were for many years the only ones with a vertically flat screen and the ones with the highest image resolution, which is why they were able to set a higher price than that of their competitors.

However, fighting in a market where there can only be one winner with a high price is an added difficulty hard to overcome. A Betamax player could cost up to thrice as much as a VHS. A burden too heavy to bear… for such a short tape.

Minidisc, MSX videogame cartridges, PlayStation… Sony has always opted for high quality proprietary formats and Betamax was no exception. They initially intended to keep their standard captive and, when they decided to open it to other manufacturers, they imposed a very expensive licensing policy.

JVC preferred to sacrifice the profits of licensing their VHS technology for the sake of instituting a dominating standard. In 1984, only 12 companies supported the Betamax format compared to the 40 manufacturers that supported VHS.

In an environment where only one standard can survive, going for a restrictive licencing policy is a very risky move. In order to institute a standard, one needs to cooperate with competitors: this way it is easier to create a new market, and what is most important, competition is discouraged. Had Sony been a little bit more open, maybe JVC would have ended up joining the Betamax standard.

The emergence of video stores created a dependence on film production companies. And in a dependent environment, one must know how to get along with the industries related to one’s product. Sony got off to a bad start with production companies: it faced a lawsuit in 1979 from Universal Studios and Disney, who maintained that it was illegal to commercialize a gadget that recorded the contents they broadcasted on TV. Does that sound familiar to you? Who is to blame for piracy, the pirate consumer or the manufacturer of the technology allowing for piracy? This is a very current issue in the Internet.

Sony won this case but not unharmed. On the other hand, JVC was able to form an alliance with some of the most important film companies, such as Paramount and even Disney. These agreements made it easier to have a wider selection of VHS tapes in the shelves of video stores. Store owners quickly realized that VHS films were rented more often, so they offered more units of them… thus creating a vicious circle for Betamax (and a virtuous one for VHS.)

Sony learned their lesson and, in accordance with their strategy of maintaining control of the user experience of their products, they entered the content world by purchasing Columbia Pictures Entertainment in 1989 (now Sony Pictures).

The end of this story

In 1981, VHS already enjoyed 75% of the market share in the US. In 1988, Sony began producing VHS tapes, thus certifying their defeat. The VHS format became the home video standard for another 16 years, until being completely replaced by DVD in 2005 (after five years of cohabitation of both formats.)

Since then, we have witnessed this battle time and again. Android (Google) vs iOS (Apple) is the most recent example of this. Apple plays the role of Sony: proprietary standards, product excellence, user experience control, a more restrictive policy to authorize Apps, etc. Whereas Google plays the role of JVC: a more open standard, fewer restrictions, etc. As it happened in the videorecorder war, Apple began sooner and enjoys higher prices, but Google has attained a larger market share. 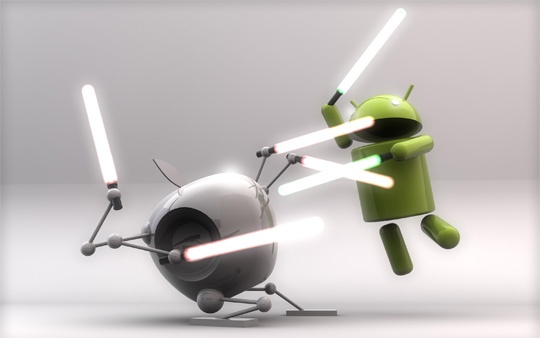 Apple’s position will be fine as long as they get content creators (Apps) to keep making the effort to develop Apps for both systems. The fact that there are more Android users is not detrimental to iOS users… as long as there are Apps in iOS. But what would happen if one day App manufacturers decide to only develop Apps for Android, valuing cost savings over the loss of potential clients? That threat is very similar to that of film production companies only providing video stores with VHS copies.

Lessons to learn from this story