In an earlier post, we saw the definition, advantages and drawback of simple random sampling. Today, we’re going to take a look at stratified sampling. 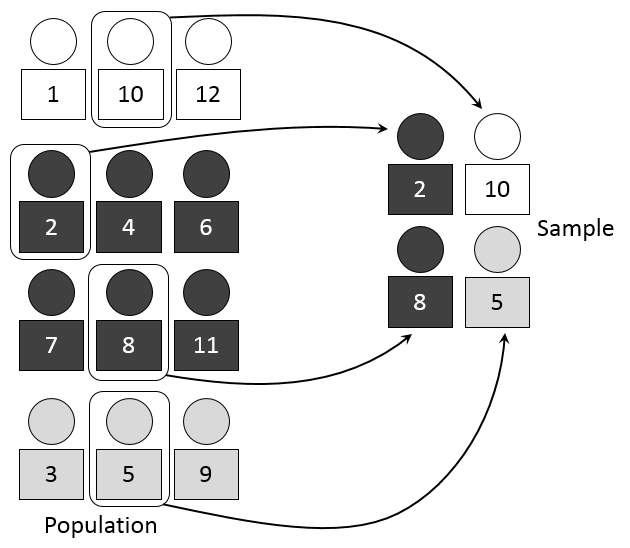 Strata tend to be homogeneous groups of individuals, while groups are heterogeneous among themselves. For example, if we’re expecting very different behavior between men and women in a study, it would be convenient to define two strata, one for each gender. If we have selected these strata correctly, (1) men should behave similarly to each other, (2) women should behave similarly to each other and (3) men and women should exhibit dissimilar behavior.

If this condition (strata are internally homogeneous and heterogeneous among themselves) is met, then using StratRS reduces sampling errors and improves the precision of our results when we base a study on our sample.

It is fairly common to define strata based on certain variables that are characteristic of the population, such as age, sex, class or geographic region. These variables make it easy to divide the sample into mutually exclusive groups and enable us to discern different behaviors within the population.

When we select a characteristic of the individuals in order to define the strata, the resulting subpopulations are often different sizes. Let’s say that we want to study the percent of the Mexican population that smokes, and we decide that age would be a good criterion to stratify (that is, we think that smoking habits might vary significantly by age). We define three strata: under twenty, twenty to forty-four and forty-five and up. When we divide the population of Mexico into these three strata, we don’t expect all three groups to be the same size. And, in fact, the real data confirm this:

If we use proportional stratified sampling, the sample should consist of strata that maintain the same proportions as the population. If, for this example, we want to create a sample of 1,000 individuals, the strata must have the following sizes:

We talk about uniform allocation when we assign the same sample size to all of our defined strata, regardless of those strata’s weight within the population. A uniform stratified sampling of the above example would yield the following sample for each stratum:

This method favors strata that have less weight in the population by affording them the same level of importance as the more relevant strata. This reduces the global effectiveness of our sample (the results will be less precise), but it enables us to study individual characteristics of each stratum with greater precision. In our example, if we want to make some specific statement about the population of Stratum 3 (those older than forty-four), we could reduce sampling errors by using a 333-unit sample, rather than a 227-unit sample (which we would use in proportional stratified sampling).

SAMPLE SIZES REQUIRED FOR EACH METHOD

Now we've seen how stratification can be beneficial. Not only can these methods be used to more precisely estimate averages (e.g. the average number of cigarettes consumed by smokers in Mexico) and proportions (e.g. the percent of the Mexican population that smokes); they also enable us to reduce the sample size necessary to make an estimate with a predetermined level of error.

The table below summarizes the sample size required for each method, based on the maximum level of error that we are willing to accept and the characteristics of the population itself, which we will assume is infinite in size (if it is finite, a correcting factor must be applied).

To understand the above table, you have to know that:

Using the formulas above, it is possible to demonstrate that these different stratification methods only reduce the sample size if the values p and σ vary between strata. Otherwise, all of the expressions are equivalent. Let’s take a look at an example: if we take the expression of sample size required to estimate an average by means of optimal stratified sampling (ignoring the parameter Z in this case)

and we consider all of the strata’s variances to be equal (σh=σ) and further consider the strata to be identical in size (Wh=1/L), we get

We hope that this post has helped clarify how useful stratified sampling can be. In our next few posts, we’ll tackle systematic sampling.

After more than a year, there is likely not a single person on this planet who does not have at the ready at least 5 ...
END_OF_DOCUMENT_TOKEN_TO_BE_REPLACED
March 1, 2021 | Maria García Limón

A few weeks ago, Joan Miró, our Director of eCommerce Solutions, presented an interesting webinar in which he talked ...
END_OF_DOCUMENT_TOKEN_TO_BE_REPLACED
January 21, 2020 | Maria García Limón

At the beginning of every year, the biggest fashion magazines talk about the latest trends for the upcoming seasons. ...
END_OF_DOCUMENT_TOKEN_TO_BE_REPLACED